Whether it’s for camping, backpacking, or just in case of an emergency at home, it’s a great idea to have a light source that doesn’t depend on being plugged into an electrical outlet to function. With today’s LED technology, lanterns provide brighter lighting for longer amounts of time and offer a variety of features that make them more than just a light source.

We reviewed dozens of LED lanterns to identify the best of the best. We looked at light strength, length of hours per charge, durability, and extra features such as USB charging. All of these products can be found online at Amazon. 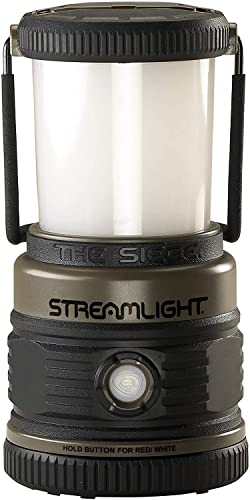 After our research, we’ve named the Streamlight Siege Lantern as our top pick. The amount of lighting modes, the extra D ring that allows for multiple ways to hang the lantern, and the battery life all make this LED lantern an excellent choice.

*Ratings are from Amazon at the time of publication and can change.

The Streamlight Siege Lantern comes with four C4 power white LEDs and one red LED for five lighting modes. It runs on three D cell alkaline batteries (not included), and is built with polycarbonate lenses and a rubber molded base that gives extra stability on uneven or slippery surfaces. It’s 7.25 inches high and weighs just under two pounds with the batteries installed. The lantern has a handle for easy carrying or hanging, as well as a battery level indicator light that changes from green to yellow to red when the batteries are low,. A nice extra feature are the D rings that are installed on both the top and bottom of the lantern, allowing you to hang it upright or upside down.

This lantern comes with a removable polycarbonate cover that helps reduce glare when installed resulting in soft, even lighting. You can also remove the cover to allow the lantern to give off a much brighter light. The lantern can then be hung upside down by the D ring located on the underside to flood a larger area with brighter light. It’s also waterproof up to one meter and is impact resistant when dropped from under two meters. Reviewers love the different light modes and say it gives off great light for camping as well as during power outages at home. 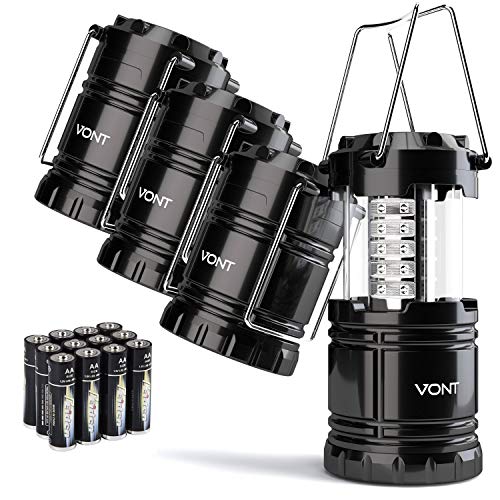 The Vont LED Camping Lanterns collapse for easy storage yet still provide a large amount of light without needing to be plugged in. With 30 LED lights that shine in 360 degrees, these Vont LED Camping Lanterns can easily light up a room or campsite. Made from military grade materials, these lanterns can survive up to a ten foot drop and temporarily getting wet from the rain.

The patented, collapsible design not only allows you to easily store the lanterns when not in use, but also lets you reduce the light as needed. No buttons are used to turn the lanterns on and off, simply unfold the handles and pull up to turn the lantern on, then push back together to turn off. You can pull the lantern up halfway up for dimmer light, or pull all the way open for full light. The foldaway handles make it easy to carry but won’t get in the way while turned on and can be used to hang the lantern on a hook or tree. Each lantern runs on three AA batteries (which are included) and will give light for over 30 hours.

When the lantern is fully extended it measures 3.4” wide by 9.8” tall, but collapses down to a height of 4.8”, and are very lightweight at 10 oz. each. They come as a set of four, so you can add a few to camping or emergency stashes to make sure you always have a way to see. Reviewers like that the light is incredibly bright for a small lantern. They also love the collapsible feature for easy portability and say these lanterns great for emergency or blackout situations as well as camping. 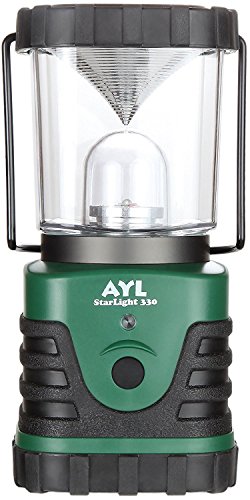 For a great LED lantern that doesn’t break the bank, check out the AYL Starlight Lantern. This lamp provides an output of 600 lumens, and can run for up to six days straight on a new set of three D batteries. The AYL Starlight offers a high, low, and flashing strobe lighting mode. The lights can be easily switched between these three settings by pressing the switch button. A removable reflector cap gives 360-degree lighting and can also be removed for a more focused beam. There’s also a hook on the bottom of the lantern that lets you hang it inverted once the reflector is removed. The carrying handle can also be used to hang the lantern upright while the reflector is in place.

Other great features include a green LED indicator light so you can find the lantern when it’s off, and a plastic and rubber molded bottom that prevents water from seeping into the lantern’s base. The batteries are easily replaceable by simply twisting off the bottom cap and inserting new batteries.

The portable, handheld size makes it easy to take hiking or camping, but the bright light output also makes this a great choice to have around the house for emergency situations. Reviewers like the long-lasting, powerful light and the fact that it only needs three batteries to run. It’s lightweight, shockproof, and water resistant, and at $20 it’s a great option for those looking for an inexpensive but powerful LED lantern. 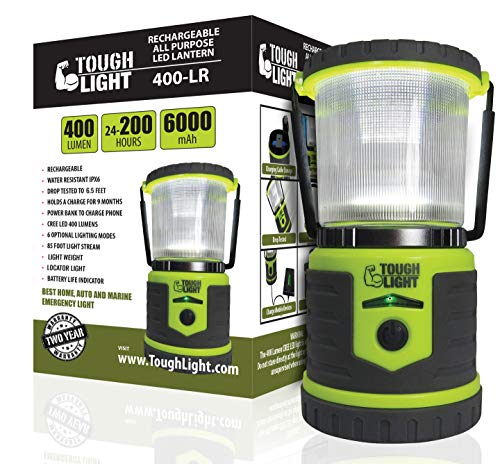 Tough Light LED Rechargeable Lantern
Not only is the Tough Light lantern a great light source, it also acts as a power bank to charge your phone.
$59.65
Buy on Amazon

Sometimes you want your LED lantern to do more than just light up the room. The Tough Light LED Rechargeable Lantern not only offers six lighting modes, but can also act as a power bank to charge your phones, tablets, and other small devices like GoPros or cameras. This lantern has an internal Premium 6000mAh Li-ion battery that can be charged from any standard USB charger block or a USB 12-volt DC charger in your car. It takes between 4-7 hours to charge, but will hold its charge for at least nine months when it’s not being used. There’s no need for disposable batteries, as the internal lithium ion battery will give up to 50,000 hours of rechargeable use.

The six lighting modes including a high, medium, low, and flashing white light, as well as a red SOS beacon and red flashing hazard setting. On a single charge the high setting provides 24 hours of light at 400 lumens, the medium setting lasts for 75 hours at 162 lumens, and the low setting lasts for 200 hours at 40 lumens.

The lantern itself is sturdy and made from military-grade rubber and plastic molds with IPX-6 construction. It’s water resistant and can handle a 5 ft drop without being damaged. And not only is this lantern able to be charged by a USB cord, it can also charge your cellphones and tablets by acting as a power bank. Other great features include a location light to find it at night and a battery life indicator so you know when the battery is low, as well as a carrying handle and a hook for hanging. It also comes with two charging cables that fit in the battery compartment so you don’t have to worry about forgetting where you put them. At 7″ high by 3.5″ wide and 1.3 pounds, this is a great lantern to have in any emergency or just for a weekend camping in the woods. 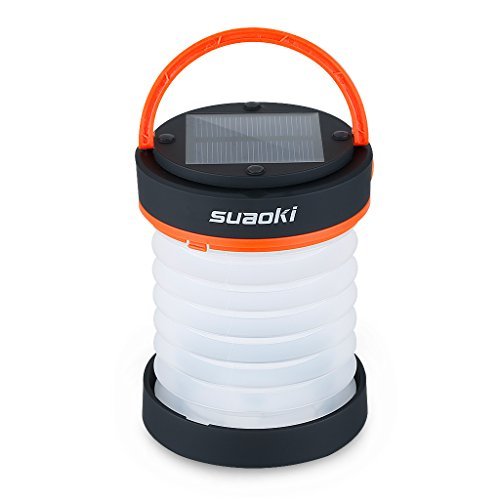 SUAOKI LED Camping Lantern
This collapsible and portable lantern can be charged by USB or solar power.
Buy on Amazon

When you don’t have electricity for an extended period of time, having a solar powered lantern can be a huge help. The SUAOKI LED Camping Lantern can be charged via the solar panel on top of the lantern, or from an external power source with a micro USB cord. The internal battery is an 800mAh lithium battery and takes about four hours to fully charge by an external power adapter with the included micro USB cable.

This lantern stands just under five inches tall when extended, but collapses accordion style to under two inches for easy storage. It comes with three light modes – high, low, and SOS flashing. The high mode will light up the area at 65 lumens for 5 hours on a full charge, while the low setting with provide 25 lumens for 10 hours. But in an emergency, just an hour of solar charging will power the high mode for 15 minutes or the low mode for 30 minutes. As an extra feature, the lantern can also be used as a flashlight when it’s fully collapsed.

Aside from the benefit of solar charging, this lantern can also be used as a power bank to charge your phones, tablets, or cameras. It’s a trickle charge, but great in a pinch when your phone’s dead and you have no other way to get power. The lantern only weighs 5.6 oz, making it easy to pack and take on camping and hiking trips. And the 1.77” x 3.5” collapsed size makes storing a few of these in a basement or garage an easy choice in case of a power outage.

Whether you’re looking for LED lanterns to take camping or just want to be prepared for a power outage, all of these lanterns are great options and can provide hours of light when there’s no other source. If you’re looking for other useful items to have in an emergency supply kit or just around the home, be sure to check out The Best Rechargeable Batteries.